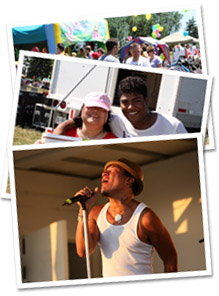 Last weekend the much anticipated 7th of July finally rolled around; cause for celebration in our house as it was the third annual Mindful Music community festival, held in the beautiful lakeside grounds of Ontario Shores, here in Whitby.
The kids had been counting down the days on the kitchen calendar with growing excitement since I turned the page over to July – J still remembered her princess make-over from last year and pictures of T with his face painted as Spiderman still draw a chuckle whenever we look at them.

Ontario Shores Centre for Mental Health Sciences is a public hospital providing specialised assessment and treatment services to those living with serious mental illness. Their approach focuses on recovery, hope and inspiration through discovery and research. Creative methods are employed to encourage innovation and advancement in mental health care. Here in Whitby Shores we’re proud they’re part of our community.

As well as working together with families and providers of those undergoing treatment, the facility builds local bonds by maintaining a transparent relationship with the public. The grounds are fully accessible and the complex has an open-door policy – it’s a million miles away from the stereotypical portrayal of institutionalised mental health care. A week rarely passes without our kids playing in the maze, snacking in the shade of the gazebos and racing one another across the grass. There’s always someone around to strike up a conversation with or nod to in passing. I take the lakeshore path every other day as part of my morning run and I’m not alone. For cyclists, runners, dog-walkers and families alike it’s a cherished part of our recreational environment.

Mindful Music is one of the ways in which the hospital extends its welcome into the surrounding community. It began in 2010, with a partnership between Ontario Shores and a talented and dedicated group of teens who use music to support health under their Medicinal Music brand. The benefits of music are known to anyone who enjoys a good tune. It has the power to bring people together transcending age, gender, ethnicity and even health-related issues.

In its first year, local bands and musicians came together to help reduce the stigma around mental illness and raise funds for Ontario Shores Foundation for Mental Health. It was a great day, of not only music, but also inclusiveness and understanding. That energy and spark lit a creative fuse and Mindful Music exploded in 2011. Featuring seven musical acts including Hollerado, Jarvis Church and Done with Dolls, the event attracted 1,500 and those who attended wanted the event to keep rolling.

Last weekend an early morning thunderstorm cleared out the humidity from a week of record-breaking temperatures in the GTA, and the sun broke through by midday, right on schedule. As in past years, Artisan Alley provided a warm and welcoming family atmosphere, with bouncy castles and giant inflatable slides, Fairytale Palace dress-up, face painting and balloon art for the children, all complementary. In fact people of all ages walked about sporting painted faces thanks to Sunflower the clown and her talented and tireless team of artists. There were stalls representing local businesses and community resources; Creative Math & Music, Whitby Public Library and our new local Abilities Centre among them, while over in the Sports Zone, kids could hone their hockey skills under the watchful eyes of representatives from the Durham Lords athletic programme and the Oshawa Generals.

Mouth-watering aromas from the barbecue filled the air and tempted taste buds, while the invigorating beat from this year’s musical line-up (48 Caliber, The Colts, Hollowick & Lowest of the Low) completed the feeling of bonhomie and drew a large audience of appreciative listeners at the soundstage, not to mention the foot-tapping and shimmying to be seen among the rest of the crowd.

The attractions weren’t just limited to the beauty and space of the grounds. This year they spilled over into the car park too, with a fantastic display of stunning vintage cars brought to us courtesy of Auto Fest Invitational – an opportunity for a sneak preview of what’ll be on display at the 19th Oshawa Autofest. For petrol-heads and vintage car aficionados it was a thrilling opportunity to get “up close and personal” with the gleaming chrome and burnished bonnets of Mustangs, Corvettes, cherished Chevys, Oldsmobiles, Fords and a Pontiac Parisienne and to chat to the proud owners. K was snapped admiring the cars by fellow expat and talented photojournalist Peter Redman.

We left late in the afternoon, the continued sounds of revelry followed us on the breeze as we meandered home. We had acquired a Batman and a rainbow-painted beauty, hundreds of photos and enough good vibrations and happy memories to see us through til next year. And somewhere deep-down, a confirmation of how lucky we are to be part of something as organic and positive as the creative vision of our neighbours at Ontario Shores.

CLICK ON THE IMAGES BELOW TO OPEN THE GALLERY

A-Z of Canada: B is for Bi-Lingual