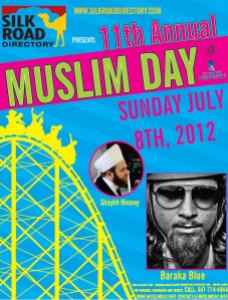 What a grasping, conniving friend Facebook is! In a bid to win my heart, thinking it knows my mind, it’s been showing specially tailored adverts in my newsfeed sidebar. This is nothing new, but something caught my eye the other day. Among the urdu car ads, and the muslim package holidays (never in a million!), I’ve been exhorted to enjoy Muslim Day at Canada’s Wonderland.

As “Canada’s premier amusement park” with the most roller-coasters anywhere outside of the US, it boasts over 200 attractions, and it’s making these available almost exclusively to muslims tomorrow – with the added sweetener of discounted tickets. Us muslims like a bargain as much as the next person. The 11th incarnation of this annual event promises performances by muslim musical artists, lectures from a shaykh, a halal food hall and places to pray.

This reminds me again of the high level of acceptance shown to all races and religions by Canada, and for that I’m grateful. But at the same time, it annoys me. Why do muslims need a day all their own to go to the amusement park? What’s wrong with going along with everyone else? I can deal with choosing the vegetarian dish at the restaurant, although availability of halal food would demonstrate the kind of acceptance that REALLY makes a difference. I’ve managed to sort out my own prayers all these years. If I need some guidance about my religion, I have friends and mentors I can turn to. As a muslim, I don’t need help to accommodate my “special requirements”, any more than I require constant religious reminders or the spurious solidarity of people whose views may well be as far removed from mine as if I were a different religion altogether.

Muslim Day founder, Toronto-based community organiser Asad Dean, has always been unflinching in his condemnation of fundamentalist Islam, so why initiate such a separatist event? In the year following 9/11, in an effort to uplift his local muslim community and celebrate the positive elements of his faith, he staged an event that would allow “Toronto youth to enjoy a very Canadian summer experience without sacrificing their needs as Muslims.” I can see how his idea was borne of positivity, but the obligations (not needs) of the muslim faith don’t exist independently from the world we live in. We have to find ways to incorporate them into everyday life, not by cutting ourselves off from it.

There is more to all of us than the label of our religions/beliefs. Is it only muslims who seek out this strange kind of exclusive inclusion?

“Yay! We’re accepted by society, they’re letting us have Muslim Day at Wonderland”, “Fantastic, but it’s muslims only though, right?”

If we fancy some fun of the roller-coaster kind, we’ll be going along with the rest of the hoi polloi…

Welcome to Canada – the home of over-priced telecommunications!