I feel an urge to visit the lake with predictable regularity. It starts with an unbidden thought surfacing like a bubble in my mind, innocent in itself, but laced with just enough longing to make it stick. A single germ, its initial effect isn’t apparent. But it blooms in my subconscious like a drop of colour on wet paper, growing in frequency and insistence until it earns the right to be called a compulsion.

Inevitably, I find my feet taking the route past the back of the plaza. A favoured haunt of coyotes in the somnolent early hours, clumps of white and purple wild phlox punctuate the tangled scrub at the edge of our sub-division, their daintiness a front for their intoxicating perfume. It fills the air with a drug-like potency, compelling you to inhale until dizziness threatens. As the sun heats the prone earth, the strident song of a thousand undercover cicadas intensifies into a persistent backdrop to all thoughts and activities, sometimes deafening, sometimes unnoticed, depending on your level of preoccupation. 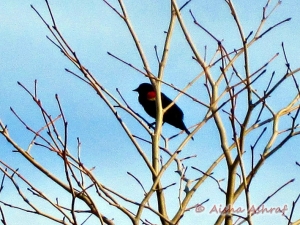 Turning the corner, we take the wide, straight, tree-lined road to the lakeshore. A succession of red-winged blackbirds monitors my progress, throatily “check-checking” their updates to one another from telegraph wires and sumac branches. The path, like all American sidewalks, is made from slabs of pre-cast concrete, laid end-to-end. In places where they’ve shifted and become uneven you can see the teeth marks of the machine used to shave off prominent corners, smoothing the way for winter’s snowploughs. Ahead, a swarm of ants looks like a puddle, rippling with the viscous movement of a crude oil spill as they crawl over one another around the gap between the slabs. Experience tells me that, in a few hours, one or two small piles of sand will be the only sign this mass meeting took place.

We pass more concrete in the form of a chunky, near-deserted satellite hospital, adrift in the vast galaxy of its own parking lot, sparse cars dotted like lonely dwarf stars in an unmapped cosmos. The unusual design of the building always reminds me of the snow fortress in the climax of the film “Inception”.

The sports fields to the left of us give way to the marina, the slurp-slop-slapping of water in the slipway a teasing indication of our proximity to the cool wetness of the lake – a welcome reminder in the midst of this hot, unyielding stone. Above, the cerulean sky flashes with silver slivers of gulls, wheeling and circling, lazily riding the thermals. As they near the ground they cut and turn, shrieking at each other and scanning the boats for tell-tale fishing tackle hinting at the chance of an opportunistic meal. The breeze carries the faint metallic clink of hooks on poles from the bristle of masts lining the floating docks, and the ferrous trace of ions in water fills my nostrils. On gusty days you can hear the haunting single-note lament of the wind as it whistles through the spaces between masts and lines, a nautical bagpipe ululation that lifts and falls with the air currents.

But today there are no squalls forecast. Overhead the sky stretches into azure infinity and out over the water plumes of pristine cumulus indicate a benign weather-system. The busy stream of sloops out of the harbour is further confirmation of nature’s current meteorological good-humour.

The unforgiving road, with its heat-shimmer mirages and baking concrete, snakes away into the distance as we leave it to enter the grounds of what used to be the old “Whitby Psych” but is now a modern mental health facility. It’s cool and tranquil here, the woods on my left offer shade from the ceaseless burn of the sun. A rolling carpet of well-tended lawn peels away to my right towards the buildings in the distance, punctuated here and there by a maze, a gazebo and trees – some young and slight, others broad and solid with deep clefts in their bark testifying their age. My mind wanders, imagining all the changes they’ve witnessed through the years, from the days when British and French trading posts peppered the shoreline and trappers canoed in and out of the mouths of creeks to trade with native tribes, to the more recent past, when patients of the psychiatric hospital must have wandered the grounds, troubled internal discourses rendering them blind to the pleasing pastoral milieu. What barbaric treatments and abstract terrors stalked their thoughts? Some people believe strong emotions are somehow recorded, embedded in their surroundings and “picked up” by future visitors in the form of ghosts and spirits. I don’t know if there’s truth in this but I so wish those trees could tell me what they’ve seen.

We walk towards the shore, immune to the draw of the manicured grounds, eyes on the prize: the lake before us, with its promise of raw beauty and continuous, hypnotic movement. Ahead, the solid earth comes to an abrupt end where the cliff gives way to water-soaked boulders a few feet below, strewn haphazardly as though by some careless, oversize hand. But we don’t walk that far; taking instead an overgrown track that winds away to the left. Gradually the crunch of fine gravel underfoot gives way to the soft caress of sand, and the familiar swish of water rhythmically displacing small stones reaches my ears. We pass through a break in the brush and the path loses its remaining solidity as it forms a sandy estuary merging into the vast expanse of the beach. We’re here.