Far from here, a world away in time and distance, a house patiently waits for me.

In my mind, it’s a perfectly preserved figurine in the centre of a snow-globe. Time there stands still, forever in freeze-frame, like the old grandfather clock in the nursery rhyme that “stopped short, never to go again, when the old man died.”

I pace around the house in my imagination, peering into cupboards and behind doors with a proprietorial eye. It’s my house. I know every inch of it like I know my body. I’m a part of its history, just as its a part of mine. It was built in 1937, two years before Hitler invaded Poland and the world found itself, once again, somewhere it had vowed never to revisit. Only one family had ever lived there, the entirety of their lives played out within its walls. What momentous, crackling radio broadcasts and anxious conversations those walls must have absorbed!

Plans and arrangements were made there, minds and jaws set. An Englishman’s home was his castle and the people took to their hearts the image of Britain as a besieged fortress, staunchly repelling the attacks of those who sought to overcome her. As blitz spirit spread like a bloodstain from the wounded metropolises, more than ever, a home embodied a place of safety, a haven in a wild world.

We bought the house when my eldest daughter was one and a half, and we were a family of just three. As soon as we saw the garden stretching 150 feet away lush with lilies, grape hyacinths and clumps of primrose dewily nestled beside the paths, we knew we could be happy there. We wandered among the raspberry canes and marvelled at the curious old-fashioned garden implements. Even the washing line was an ingenious homemade pulley system  – this wasn’t a garden to observe through a misted window from inside; it was a garden to live in; working the soil, tenderly raising and cultivating, breathing in the life around you. It didn’t matter that the house had no plumbing for a washing machine, that the kitchen was a cramped collection of chronologically added cupboards and work-surfaces, or that the light switches emitted smoke and sparks. Something in that place invaded our hearts and gripped them, unremittingly.

Months passed and we stripped the house to its bones. We evicted the silverfish, demolished the coal-shed, and unscrewed the old, black Bakelite switches from the walls. We saved the heavy, pitted workbench from the asbestos-filled garage, hauling it to the shed we’d erected at the rear of the garden. When we lifted the carpets the yellowed newspapers beneath spoke of a time when you could buy a house for three hundred pounds. Gently, we removed all its adornments from a past wartime life, like a woman removes her jewellery before bed.

As the year wore on, the original owners passed away, first Mr Butcher, then a few months later, his wife. Both in their nineties, they had moved to a retirement home before the sale. In a matter of months, life had left them. I imagined their spirits roaming the garden where they had spent so much of their time; tending the big vegetable plot that easily covered fifty square feet, but was double the size during the war to sustain their family. I suspected though their corporeal forms had left before the sale of the house, their souls had always remained.

Slowly, we extended and re-shaped the house’s footprint; demolishing, building and re-plastering; installing new wiring and plumbing, a new staircase, new doors and windows. We left for three months in winter, to live in austere Edinburgh while our expanded home was made habitable with roofing and heating, before returning late one evening at the beginning of April with a similarly expanded family. Three had become four. A dust-covered, battle-scarred vacuum cleaner told of the builders thoughtful preparations for our return, but a scarcity of light-bulbs prevented a full appreciation of their work. Exhausted, but back where we belonged, we slept. 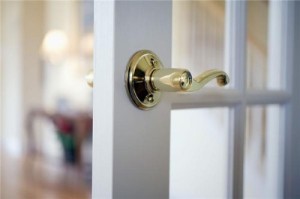 When I woke the next day, my eyes took in the soft morning light sliding over virgin plaster, smooth curves and joins and warm, new wood. Beyond the wide, curtain-less windows lay the garden, patiently waiting and verdant with spring growth. I was finally home and everything I had visualized was now real, tangible. After all the evenings spent poring over our hand-drawn floor plans in Edinburgh, heads together, marking out for the builders where we wanted sockets and switches installed and which way doors should be hung, it was just as we had planned it – translated into three-dimensional solidity. I’ll never forget the feeling – it was dreamlike. We had created our own haven – our little piece of calm in the wild world.

I walked around exploring in the early morning quiet, feet padding on bare floorboards. I ran my palms over new walls, born from our imagination and brought into being by the builders, and remembered where old doorways and windows had lain. Somehow in this house, history was always present; not confined to the past, but escorting you through the here and now. Downstairs in the living room, the entire back wall was given to french doors that opened out onto the garden and swung back flush with the outside wall, making the transition from indoors to out seamless. As I stroked the cool, mirrored chrome of taps and tested soft-close doors and drawers experimentally, I wondered what the previous owners would have thought. I knew I loved this house as deeply as they must have. I hadn’t felt this connected to a place since I left Ireland as a child.

Months flew past as we painted walls, glossed picture rails and skirting boards and sanded the beautiful oak staircase and doors. Intimately and lovingly, we acquainted ourselves with our new home through careful decoration. The contours of each spindle of the bannisters were painstakingly smoothed and coaxed to a silken sheen, carpets went down, brass door-stops were fitted and the kitchen, utility room and bathrooms were tiled. We took delivery of our range-cooker through the french doors in the kitchen and oversaw decking erected to provide a platform for outside dining and steps to the sunken part of the garden, created decades before when Mr Butcher excavated gravel for the garden pathways. We turned it into a patio with pastel-toned slabs of Indian sandstone laid in a circular design bordered by the heather that Mrs Butcher had planted long ago – always the first welcome splash of colour after winter released its chill grip. With the block-paving of the driveway, the landscaping was completed.

As I tended the kitchen garden or sat, gently rocking on the swing-chair, reading in the fading evening light, I would pause now and again, imagining our children growing up here, moving toward maturity as the years passed. A third was now growing within me and I finally felt safe and settled. Leaving my haven and travelling the wild world to Canada couldn’t have been further from my mind…