PART OF THE “BREAKING THE CODE OF SILENCE” SERIES

[dropcap]I[/dropcap]n my early teens I began to experience overwhelming, unshakeable mood swings that, like a lens applied to my perspective, coloured my life. I’d feel them starting, a slow-motion crushing sensation, like being caught in an industrial compactor, and I was filled with dread.

I needed to be around people when they occurred, the places my thoughts took me to frightened me, but I was criticised at home for being moody, so I spent a lot of time alone waiting for them to pass.

What is Borderline Personality Disorder?

I suffer from Borderline Personality Disorder (BPD). I was first treated for depression at 15 but doctors can’t make a diagnosis of BPD on an adolescent, due to their personality still being in its formative stage. It’s a condition in which people exhibit long-term patterns of instability and turbulence in the areas of self-image, relationships and emotions.

There are 10 classified personality disorders and of those, BPD is the most common, most complex, most studied, and certainly one of the most devastating, with up to 10% of those diagnosed committing suicide. It exists in approximately 2-4% of the general population; up to 20% of all psychiatric inpatients and 15% of all outpatients.

How is it diagnosed?

A person is required to be exhibiting five or more of the symptoms below for a diagnosis of BPD to be made:

BPD is thought to result from a mixture of biological, genetic, social and psychological factors. In other words doctors aren’t sure and are keeping their options open, but studies have shown a high correlation between traumatic events during childhood and occurrence of BPD. I always knew my experiences growing up and my relationship with my parents were responsible for a large part of my mental health issues and as I grew older, I tried to maintain a distance from them to help myself. But it was incredibly difficult to accept that they weren’t the supportive family I needed and every so often I would allow myself the hope that perhaps they could be. That never proved to be the case.

Thankfully, with BPD, the symptoms become less intense as a person ages and sufferers experience few of the extreme symptoms by the time they reach their 40’s or 50’s.

What does BPD mean to me? 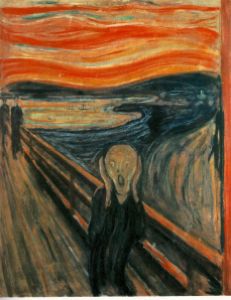 A diagnosis of BPD at 25 didn’t give me any great insight at the time, beyond the confirmation that I wasn’t completely to blame for my uncontrollable mood-swings and self-destructive tendencies. I was in a very dark place, frequently suicidal, self-harming and full of self-hate. It wasn’t until much later, after therapy, that I began to gain a greater understanding of myself, and even then, it could be frustratingly fleeting; a glimpse of something that resonated within me but was too intangible to pin down.

While symptoms differ from person to person, my BPD affected me in a number of ways:

I still don’t have a clear sense of who I am. If asked to describe myself, I have to consult other people. On one level, I know I have opinions, likes and dislikes. I HATE mushrooms and I know the difference between right and wrong, but there seems to be something in me that is very impressionable. Every time I watch a film I come away identifying with some aspect of a character and wondering if that’s who I am. For a while, my thoughts and behaviour might change, until the influence wears off and I’m back to being a blank canvas again. I feel as though I have some definable “pieces” but they’re not enough, or don’t fit to make a whole person.

Learning to live with it

I was treated with medication to get my head into a better place and I had Cognitive Behavioural Therapy to help me deal with my triggers. I discovered the thought and behavioural patterns I had become enmeshed in and worked hard to undo years of ingrained habit. It was slow and difficult work. I would get so frustrated when I could identify my problems but my habitual response would automatically kick in. Knowing the problem was one thing, but fixing it was another. It was particularly difficult to deal with people who triggered my symptoms but I eventually faced them and voiced my feelings. Doing this, in spite of my fear, gave me strength in the face of their denial and helped to give me another tangible “piece” of Me to fit with the others.

Hard work and persistence won out in the end. I wanted to change things, and with support from my husband and mental health team I did. I finally received confirmation from The Priory that I was in good mental health and no longer required treatment. That was some years ago now. I still have difficult times, but I know that if I dig deep, I have the tools to get through them. Thankfully now those times are few and far between.

Linking up with the Love All Blogs Mental Health Blog Hop.

Author’s note, June 2014: Since the time of writing I’ve been re-diagnosed with Aspergers and Bipolar II. I no longer meet the criteria for BPD and given the existing cases of Aspergers and bipolar in my direct family I have to admit this re-diagnosis seems a more accurate explanation for my symptoms. Oh, the beauty of hindsight…

Now where did I put my Chihuahua?

The Power of Nature