I’ve tried to sex this post up but failed miserably. Perhaps I should have run with “B is for Buttertarts”. In any case, the blame lies squarely with S for getting me up three times last night. All complaints addressed to her please. If language is your thing, go ahead and enjoy. If this isn’t your bag, then go have a trawl through LoveAllBlogs, and find something that is…

Canada is a bi-lingual country. English and French are enshrined in its constitution – although strangely, learning French is not compulsory in schools. All federal services, policies and laws must be enacted and available in both languages. All MP’s, including the Prime Minister, need to be fluent in them. Canada’s premier, Stephen Harper, routinely fields queries in both French and English at Prime Minister’s Questions.

For the average visitor to Canada, this commitment to bilingualism results in some obvious differences: 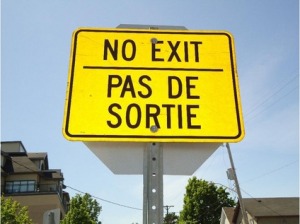 Unless you are travelling throughout the more remote parts of Quebec, English is all you need to get by in Canada. Its bi-lingual status is more of an official designation. The majority of inhabitants are English speakers and knowledge of the two languages is determined largely by where you live. Almost 95% of Quebec’s inhabitants (Quebecers) speak French (or Quebecois, as it is known) but only 40% speak English. That’s still better than the rest of the country, where 97% speak English but only 7% speak French. Each of Canada’s 10 provinces and three territories adopt their own official language policy. At a provincial level, Quebec – lovingly deemed Canada’s smoking section –  is the only province that is unilingual, vehemently French in every way, while New Brunswick holds the honour of being the only officially bi-lingual province.

Quebecois (or joual) is different from the French spoken in France and there is a fair degree of snobbery between the two languages about who is correct. Canadian French is thought to originate from the Classical French of the 15th and 17th century which became isolated from European French with the onset of British rule in Canada in 1760. Older pronunciations were retained here that later died out in France, thus the French spoken in Quebec can be unintelligible to a Parisian!

Although not part of the commitment to bilingualism, it would be remiss not to mention the wealth of other languages spoken here. After English and French, Italian, German, Chinese and Punjabi speakers are numerous, as are speakers of the indigenous languages, such as Cree, Micmac, Ojibwe, Inukitut, Algonquin, Blackfoot and Mohawk to name a few.

Canada truly is a melting-pot of many cultures. Can you think of anywhere else like it?

Linking up with My Personal A-Z Challenge

A-Z of Canada: E is for Emerge

A-Z of Canada: D is for dandelion, Dollarstore and ‘due diligence’

A-Z of Canada: C is for Cottage