When I first moved to Canada I was struck by the wealth of Canadian flags on display everywhere. I don’t just mean in shops or at tourist attractions, I’m talking on people’s lawns or balconies, some people actually have flagpoles on their property.
At first it made me nervous. Coming from the UK, where flag-waving is limited to royal visits and the Last Night of the Proms, I was used to seeing a flag displayed year-round as an indication of nationalist leanings. That person is usually making a dark political statement about the superiority of their “race” above others, and a desire for everyone else to “go back where they came from”.

Unfortunately, the British government failed to properly educate its citizens about the benefits of immigration right from the get-go. This resulted in political parties using race and immigration as an election tool, fanning the flames of irrational fears and promising to save the country from impending, imaginary doom. The UK is now in its present uncomfortable position. Like someone who has invited a new friend to dinner, made a serious faux pas, and is so mortified, that they become awkward and resentful, overcompensating for their mistake, while simultaneously feeling angry at the other person for being a part of the equation in which the mistake came into being. In the end, they can’t wait for the meal to be over and the guest to leave.
Political correctness is in overdrive in Britain, with Christmas nativities cancelled for fear of offending, and cards that read Happy Holidays instead. None of the ethnic minorities have asked for these actions but bear the brunt of people’s resentment of them. Immigration is a VERY loaded word. People being made to feel uncomfortable in their own “home”/country has led to a rise in nationalist fervour.

Anyway, I digress, immigration in Britain is a complex issue and this post started as an observation not an analysis. So, to get back to the story. You can understand my nervousness. Here I was, new to Canada, still very much a “them” in the “Us and Them” equation that I imagined to be in the minds of most Canadians. What right did I have to be here? Was my husband taking a job that could be done by a Canadian? If I had a problem with anything, why didn’t I just go back home? Imagination and learned experience can be a curse you know! 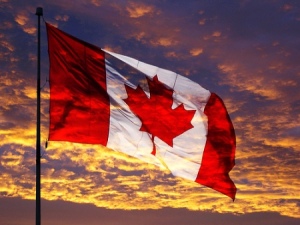 The best antidote for this spiral-down-the-plughole way of thinking is to get out there and talk to people. I always think children and pets make this easy. You have an excuse for floating aimlessly around, falling into conversation with whoever happens by. I haven’t had a negative encounter to date with anyone out here, and we’ve been here over a year. Canadians (give yourselves a congratulatory pat on the back) are, on the whole, a thoroughly well-meaning, relaxed, compassionate and well-adjusted bunch of people. They will give you their cellphone number in a heartbeat. They will go out of their way to help, despite the fact you are a total stranger. Many have parents who emigrated, or have emigrated themselves and understand how it feels to be starting from scratch in a vast foreign country where you don’t know a soul. Friends and neighbours have lent us things, taken us places, given us stuff and explained things to us. I have never baked so many cakes!

Canadians fly their flags because they have a great country and they’re proud to be Canadian. They’re not arrogant or in-your-face about it (Americans take note). They have a nonchalance and contentment that almost makes you wish you were in their gang! And they are so welcoming, it’s easy to feel like you already are!

For an interesting read on the differences between Nationalism and Patriotism click on this link.